Free Delivery on orders over £49 plus VAT

Trusted By Thousands 4.7 out of 5 on Trustpilot 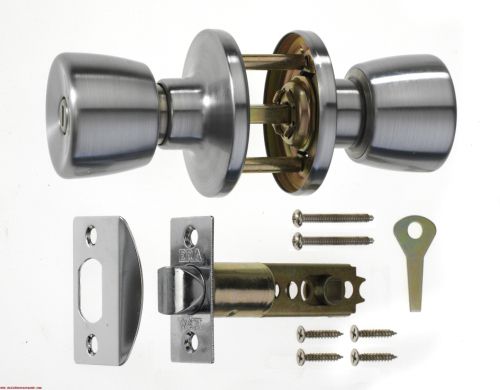 Delivery for this item is 1-2 Working Days

The Era door knob set is designed to replace Weiser door knobs. Weiser door knobs were commonly used in the 1970's and 80's. Weiser use a very specific latch system which requires a large portion of the door to be removed. This can mean it is very difficult to find replacement knobs without reconstructing and filling your doors.

These ERA Door Knobs are made to Weiser specifications so can be directly and easily swapped in most cases. Easy to install, each set is supplied with fitting instructions and templates. The integral Tubular Latches supplied are adjustable to either 60mm or 70mm, which are standard Weiser sizes.

Please Note: We recommend that these knob sets are only fitted with the Tubular Latches supplied. Original Weiser latches may differ slightly in specification or be too worn to accommodate new spindles correctly.

Entrance Set: Supplied with integral key operated lock on one side, and a thumb turn on the other side. Can be locked from both sides, using the cut key for outside and turn button on the inside. 2 keys included.

Privacy Set: Supplied with integral thumbturn and release. can be locked from one side, and emergency-released from the other side.

Supplied in PAIRS complete with an adjustable tubular latch, spindle, and screws.

NOTE: If your order contains a mix of products they will be despatched altogether. The delivery will be determined by the product with the longest delivery time. For more info see delivery page.